Three stories of lesbian discovery and sensuality from the archives of the award-winning Karin Kallmaker.

In the explicit “Steam,” a hike in the high country provides privacy and pleasure for an adventurous long-term lesbian couple.

The touch of a former lover’s hand brings back too many vivid memories, and the unwelcome introduction to the new girlfriend is “Salt” in wounds that won’t seem to heal.

Humor, tenderness and high-erotic energy combine in “The Butch Across the Hall”: Attracted for the first time to a butch woman, an inexperienced lesbian finds the courage to knock on her neighbor’s door.

“The Butch Across the Hall” was originally published in Back to Basics: A Butch-Femme Anthology (Bella After Dark).

“Salt” was originally published in The Touch of Her Hand (Naiad Press) under the pen name Laura Adams.

“Steam” has also been published as “Fire and Ice” in Ultimate Lesbian Erotica 2005 (Alyson) and as “Ice and Fire” (self-published).

One price unlocks all formats.

in their exclusive formats, and independent booksellers for Kobo.

Web Site Exclusive! Two of these stories are free only at this site.

What People are Saying...
Covers Past and Present
Other cover art for these stories 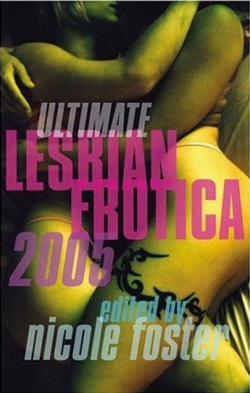 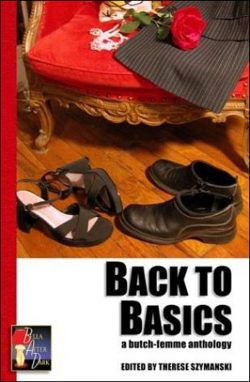 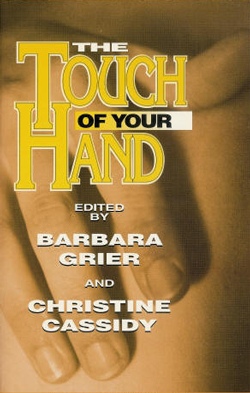 Excerpt from “The Butch Across the Hall”

I counted to ten and raised my hand a third time to knock. Yet again I couldn’t do it. Beyond the door I could hear a ballgame and the infrequent scrape of a spoon against a bowl. I was assuming it was soup again tonight. I’d seen the empty cans more than once in her recycling bin. Miki’s diet was a lot like mine.

When I’d realized I had accidentally received her mail, I had changed into a clinging black sweater and tidied my curly hair as best I could. I was a long way from her ex-girlfriend in the looks department but that didn’t mean I couldn’t make an effort.

My husband—seven years my ex—and my girlfriend—six months my ex—had both called me “cute.” They had said it mostly to annoy me.

I sighed, my knuckles a long way from making contact. I was in a sweater that clung to my breasts, because, well, just because. Because Miki and I had both been single for a while. That’s all. Because we could at least watch a ballgame and share a beer. It beat being alone every night. That’s all.

Because I couldn’t look at the faint smear of make-up on her doorjamb without breaking into a sweat.

I doubt she knows it’s there. Maybe she does. Maybe it’s some kind of trophy. Her ex had left it last Halloween, hurriedly hiding her face when Jilly and I interrupted the two of them against the wall outside their apartment.

I’d had a bit too much to drink at the party, but I could still recall, with shivering clarity, Miki’s voice. Just as we came around the corner she said, “You didn’t know I was ready to go, did you?”

Her girlfriend had groaned out, “Do me, baby,” and we were abruptly all looking at each other, perfectly recognizable in spite of our costumes. I forget now what Jilly and I had worn. But I remember well that Miki was dressed like James Dean, right down to a pack of cigarettes rolled into her T-shirt sleeve. Her thick black hair was slicked back, with a greaser’s curl dipped across her forehead. A leather jacket was on the floor. Her girlfriend was queen of the sock hop, including the heavy artillery bra underneath her unbuttoned blouse.

After the averting of eyes on all parts, Jilly had dragged me into our apartment. I did not forget how Miki’s blue jeans were loose in the back, or how her hips disappeared into the flounces of her girlfriend’s red poodle skirt.

Excerpt from “Ice and Fire”

Our breath steams in the air. We’ve reached our turnaround point for our day hike, a long, flat slab of granite that feels like the top of the world. The rock is ideal for resting and admiring the high country view, especially on an autumn day where there are too few words to describe the blue of the sky.

Callie’s daypack holds her sketchpad, pencils and chalks. Before the light even hints at fading, she’ll have captured the sky, wisps of clouds, the gray and green mountain and crackling red maple leaves. Beyond all of that lush beauty is the rolling, deep blue of the Atlantic.

The rest of the world is far away. We had passed no other hikers on the trail up the mountain and our special spot is off the trail. There’s only the sound of trees moving in the cold wind and the rustle of our dried fruit snack and sips of hot tea from the Thermos as we murmur to each other about the splendor of the panorama.

The air itself is like wine. We settle on our rocky perch to enjoy the sun, then our kisses are like wine, too. It’s easy to feel intoxicated at this altitude. The look in her eyes as she gazes at me leaves me dizzy. When she kisses my palm I let her see the trembling in my arm. Callie hears my gasp and her warm lips curve in a knowing smile. The bright sunlight puts a sparkle in her eyes, and I see her intent there. She isn’t settling for kisses.

As the water evaporates from my cheeks the salt remains on my skin just as you remain in the deep recesses I cannot clean. I could scrub with soap and the salt would still be there. I scrub your memory with acid and lye and your memory clings ever harder. Salt is, after all, a preservative.

When something is preserved with salt, it’s called “cured.” With so much salt on my skin you’d think I would be. I would be the salt of your earth, but salted earth grows nothing. Salt flats are the purest form of toxic beauty.

You said you loved me and yet you could tell her that we’ve remained friends.