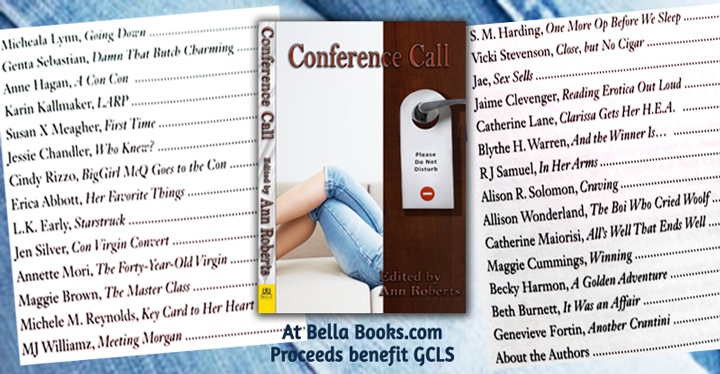 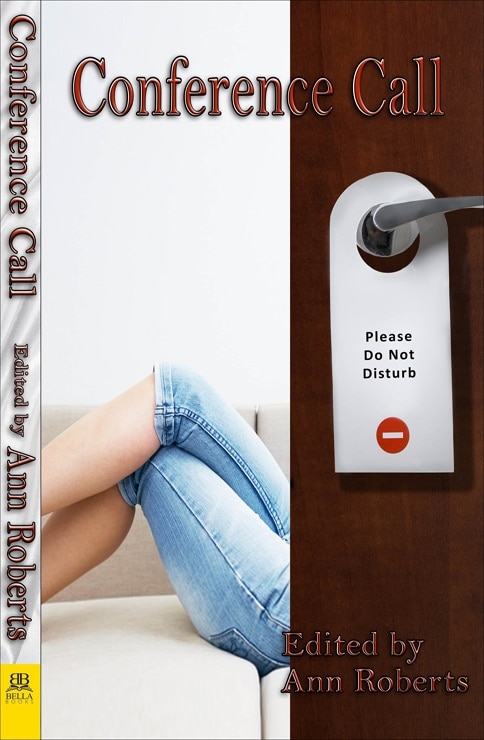 Coming to a conference near you – that is, if you’re going to be at GCLS2017 in Chicago starting July 5th. Edited by Ann Roberts, Conference Call is a goodie bag of romantic stories set in, before, around, during, on and after conferences. Women liking the company of women – nothing better than that.

You’ll still be able to get with the program even if you’re not attending Golden Crown this year. Conference Call will be available after the conference via Bella Books.

Here’s the opening from “LARP,” my this-could-be-the-start-of-something-good contribution. There is a rumor that the opening visual of Frank N. Furter strutting across a hotel lobby may or may not have been inspired by a recent GCLS conference attendee. Allegedly. Or #FakeNews.

by Karin Kallmaker
She was dressed like something out of the Rocky Horror Picture Show, stiletto heels clicking as she strutted across the Omni West hotel lobby. Heads snapped around to follow the woman’s progress, and Quinn Simmons’ was no exception.

Quinn eyed the close-fitting open-laced black vest that displayed both cleavage and the underside of small, firm breasts. A string of chunky white pearls ringed the long neck. Then her gaze slid down to the garters snapped to thigh-high fishnet stockings.

It was seriously righteous costuming. Clearly Frank N. Furter was on her way to the con’s opening cocktail party and costume parade.

Scrambling to her feet, Quinn tapped out of her phone’s map program and followed the sashaying Frank into the hotel maze. Even prepared for her usual conference-anxiety-fog, Quinn found the hotel map bewildering. She’d learned the old hotel pretty well, but this new one was huge and intimidating. Construction in one wing rerouted traffic from the central escalators into a maze where every turn seemed to lead in the least expected direction.

She’d already found herself inexplicably in the attached shopping mall twice. Apparently, all roads led to Starbucks. The hotel’s helpful directories of events for the day had listed four “Opening Events,” all beginning at 6:30 p.m.

Quinn took Frank N. Furter’s appearance as a sign. Surreptitiously in step with the imposing figure, she paid attention to keeping up with the long strides and ignored how many turns, twists and escalators it was taking to reach the event venue.

She did notice the turning heads—everyone was watching Frank, and why wouldn’t they? Frank had great legs. The vest was filled out to muscular perfection. Following behind Frank was no hardship on the eyes either. Women in costume brought down the house at just about any con. Frank made a refreshing change from the array of Klingons, Sailor Moons and World of Warcraft larpers.

Like every year at AllCon, Quinn had a resolution. She was going to walk up to someone in a costume ensemble and say, “I want to Live Action Role Play. Do you have an opening?” Her favorite fandom was Overwatch, followed closely by Legends of Zelda, but she was fine with Once Upon a Time and the oldies but goodies like Star Trek and Lara Croft, even Babylon Five.

She was flexible. She just needed the courage to ask if she could play too.
This was her third year at AllCon and she’d not said a peep to anyone. Ever. How did you start a conversation when everyone else was greeted with excited squeals, warrior roars or effusive hugs? Lingering hopefully for a conversational opening had worked about as well as it did the rest of her life. Which was not at all. Like Rita Mae Brown said, doing the same thing over and over and expecting different results was insane.

She wanted to get involved, and AllCon was a great place to meet people who weren’t exclusive about gaming versus TV versus movies versus comics. People were into the stories, and as far as Quinn was concerned, a good story was a good story wherever it was played out.

Her backpack grew heavier with every long hallway and escalator. The costume she’d brought was basic Captain Janeway. Janeway was popular in fandoms outside Star Trek, and if there were some women in the group, all the better. She wasn’t holding out any hope that any of the women would also be lesbians. That was too much to ask for.

Plus Janeway went with her red hair and skin so white she was blue in certain light. Her mother had once said that Quinn reminded her of feathery light vanilla pudding with a golden cherry on top.

Her mother had meant to be helpful.

In her Janeway captain’s costume and knee-high leather boots, she didn’t feel insubstantial and pale. Even though she was only twenty miles from home, in this strange hotel she felt light years away from Quinn Simmons, Pale Girl.

Studying herself as Janeway in the mirror at home, she had thought she could carry it off in a group. However, looking at the sheer excellence of the Frank N. Furter she was following, she was starting to have doubts.

A hubbub was audible from around the next corridor and Quinn felt a wave of mixed fear and relief. Frank turned out of sight and a bedlam of applause and cheers broke out.

Quinn ran for the women’s restroom.

Don’t lose your nerve, girl. The restroom was thankfully empty when she entered and she used the biggest stall to get out of her street clothes and into the black and red jumpsuit. She was a good tailor and it fit her well. She carefully pinned on all four of the pips indicating her captain’s rank, and dragged her stuff to the sink and mirror in the furthest corner and set to work. Twenty bobby pins later she had the signature Bun of Steel updo in place.

Conference Call is available for pre-order at Bella Books.

I have limited signed copies available.

For your visual pleasure, here’s a quick look at what the Golden Crown Literary Society Conference is all about: