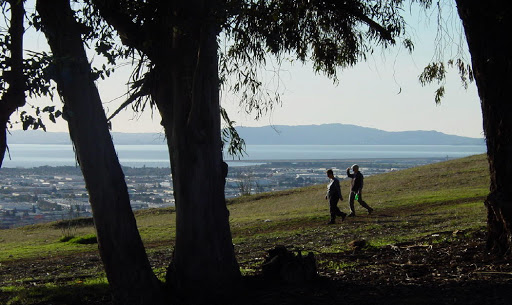 It’s still five days to 2009, but it’s time for a New Year, isn’t it? Everybody knows somebody who is looking for a new job. We’re going to get a new start with a new president, but in the meantime we still have the old one. The year end mutual fund statements are going to hurt more than the last, and even tougher than the near-retirement boomers realizing they will have to work more years now are the near-college teens realizing their college funds aren’t worth a fraction of what they hoped.

Let’s face it: With the exception of 8p.m. Pacific time, November 4, the last three months of 2008 have sucked. It’s time for a new year.

The new year is on the way. I could tell because we lost the gray skies, bleak vistas and harsh cold winds and rain that made the last few weeks depressing. Clear skies for us means some mercy for the midwest is on the way.

Today we went hiking with friends and enjoyed the brisk, crisp air and head-clearing wind. The view from nearby Chabot Ridge was spectacular. The sky seemed large enough to hold thoughts of past and future and for letting got of negativity.

Right now, job-wise, I’m finishing the edits for my next novel, Warming Trend, and settling the books that will be on the Bella Books August 2009 to February 2010 calendar. It’s exhilarating to plan the titles that will go out which months, and nerve-wracking in that our talented writers have produced entertaining books with great themes and exciting plots, and I don’t want to mess anything up for them. Nobody gets paid nearly enough for their work, so the least I can do is make sure it reflects well on the author and gets to the readers as expected. Seeing new books before they’re even books is thrilling, though. I’m surrounded by new.