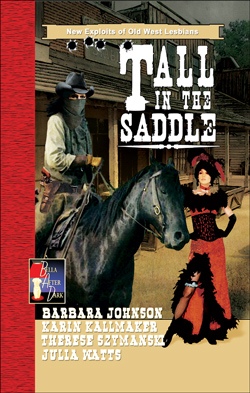 Cowboys and Kisses: A girl sent west on a one-way train ticket, due to her unnatural feelings for another girl, takes up the only profession allowed someone so young. Four years later, at seventeen, she encounters the cowboy she can love, and her first taste of happiness.

Cowboys, however, are born to wander, and their kisses are as brief as the lives of young women without family or means. A lyric and ultimately realistic story of the real wild west.

Originally written for Tall in the Saddle: New Exploits of Wild West Lesbians.

The American West is probably one of the most romanticized eras in our history. What might save a girl too old to be a child and too young to be an adult when there’s only one way to make a living? Her life would be brutal, short – and no one would ride to her rescue. But there is more than one way to survive, isn’t there?

Every time the big front door opened the wind blew in dust and a cowboy.

Cherry predicted we’d have twice the customers a week from now, when the fall drive reached its peak. As it was, with only the leading edges of the herds arriving in the waning days of late summer, the rooms were turning over three and four times a night. Cowboys entered flush with their season’s pay. Whiskey, a bath and an hour or two of female company was all they had on their minds.

I kept my attention on my needlework. The door opened, there was a scuff of boots and my unfashionable brown curls were overlooked again when the customer made his choice. Sooner or later I’d have to go upstairs. Cherry wasn’t running a sanctuary. She’d told us all that more than once, and I had no wish to have her do the picking for me.

The next time the wind blew in a customer I stole a quick glance. Not a cowboy this time, a local. Jinny caught his eye with a decisive gesture that warned the rest of us to keep in our places. Like most locals he no doubt wanted what a missus had no time or energy to give—a sympathetic ear and a quick tumble. I’d have not minded being his choice. Jinny smiled and laughed all the way up the narrow stairs, her lively face a contrast to the faded roses in the wallpaper.

I needlessly smoothed my sewing floss and took another stitch, worrying inside that I’d missed my best guest for the night. There were locals who weren’t nearly so easy to please. With the beginnings of the cattle drive in town there also were strangers whose needs were unknown and hard to anticipate. I showed ample curves as I worked under the brightest lamp, but compared to some of the other girls, I was not prime livestock. Given a choice, what customer wouldn’t pick Angel over there, with her shining blond curls, air of innocence and exuberant smile? She’d been here a year and it didn’t show. This cattle drive was the fourth I’d seen and, at seventeen, the years that didn’t show in my face were revealed in my eyes.

Angel was a nice enough girl. She drew customers easily, had worked her way to the best room in the house and could take off for blood days even. Since talking wasn’t what most guests wanted, few realized she was not just illiterate—most of the girls couldn’t read or cipher—but stupid as well. Her common sense could fit in a pea. As Cherry said, she’d known turkeys smarter than Angel. No turkey ever made Cherry the money that Angel did, however, and in this place that is what counted. I had all my brains, and what did they get me? If I did not have some additional use because I knew my letters and numbers, my earnings would not be enough to pay for the room where I made my money. As it was my meals were curtailed, both from my lack of earnings, and because Cherry was certain I would grow fat the older I got. Curves were valued at bosom and hip, but not at the waist.

I raised my face when the door next opened and felt my smile freeze stiff as a winter wash basin. Otis, the colored boy who fetched water and whiskey but sometimes played the piano in the evenings, paused momentarily, then resumed his jaunty tune. All the girls found someplace else to look. Loomis—first name or last, I didn’t know. Trying to call no attention to myself I slowly refocused on my needlework, listening to the exchange between him and Cherry.

“Back so soon? We’re honored of course,” she said as she rose to greet him.

“Can’t disappoint the ladies,” he answered.

I knew he was staring at each of us and I willed myself not to look up.  Not me, I prayed. Please not me. I’d had several appointments with Loomis and didn’t want to repeat any aspect of them. He was a month of bad news rolled into a single hour. He hadn’t been pleased with me anyway, though like all men he got the finale he wanted. The last time his earlier displeasures had been part of what he’d wanted to tell me all about.

“We’ve got a fine variety tonight.”

He made a show of it, examining his horseflesh before venturing to buy. “I might take myself two.”

That was a relief. It would go easier for both.

“Tell me,” Cherry said, her tone like sugar water, “that little girl you took in, Milla? How did she work out?”

His tone roughened with scorn. “Well, after I fed her and cleaned her up, gave her a warm place to sleep and treated her like family, she wandered off one night. Found her a few days later by following vultures. The thanks I get when she’d have starved all the sooner without me.”

I caught back a noise of distress that would have attracted everyone’s attention. Milla had been in the room next to mine until something had gone wrong with her. Cherry called it Prairie Madness, but it had started after she’d been sent out to a party for the first arrivals in this year’s cattle drive. Entertaining a group was one way Cherry could boost a girl’s earnings if she was unpopular with the house customers. Milla had been older than me, nearly twenty, and cost Cherry a doctor’s fee. Needing the doctor to fix a girl’s missing courses had become Cherry’s constant complaint since the Comstock Law had made it impossible to acquire french letters. They were too dear for most men to afford regardless, but none of us had seen any for going on a year now. The doctor made more money off of Cherry than anyone else in town.

Just a few days after Milla’s visit from the doctor, she’d been sent to entertain the first-arrived cowboys and drovers and come back to her room not the same. She wouldn’t smile. Couldn’t smile. You have to smile, I had warned her. Milla wasn’t stupid, and I liked her. She’d been nice to me when I’d first arrived. But she wouldn’t listen to me and sure enough, Cherry put her out. Milla had just folded in on herself and huddled at the back door, like a horse that knows it has no run left.

I’d tried to slip her food out the door with a tin of water at least once a day, but when Loomis noticed that she was on the street, he’d taken her with him. I’d seen him half-carry her to the wagon. The stupid girl. She could have offered herself to a farmer for the harvest work and anything else the hands might want. At least that would have meant a nook in the barn and food. There was a chance that even after the harvest was done the wife wouldn’t have run Milla off if she’d proved herself useful for anything. Another girl had told me she knew of a girl who’d been taken in by a family because she knew how to butcher of all things. It was a hope at least, while staying outside Cherry’s back door was no hope—if not Loomis, someone else. Men like Loomis were the end.

I blinked back tears, thinking of Milla wandering in the tall grass, no path to help in sight. I didn’t want that future but every year the cattle drive seemed to make it more unavoidable. But I wouldn’t go to Loomis. I’d plow fields with my bare hands before Loomis.

“Some girls haven’t any sense.” Cherry turned slowly to look over the room herself.

Not me, I prayed again, more fervently. Please not me.

“I’d not had use of her anywhere near what I spent to feed her up.” Loomis made further grousing noises, as if Cherry was responsible for her cast-off property, and I knew what Cherry would do.

“Teena and Jade, you show our guest here upstairs, won’t you?”

Not Angel, she was too valuable. Teena and Jade were the next prettiest girls there were and that would silence Loomis’s complaints. He’d have whined further about his lost food in Milla’s stomach had Cherry chosen the likes of me.

I was weak with relief. Luck was not something I counted on, though, and I knew I’d have to make an effort to earn more than an hour tonight. Milla had been silly to put herself at Loomis’s mercy.

The door blew open again and I looked up, too wary to actually hope for another local man like Jinny’s. This cowboy was on the small side, saddlebags and coiled whip slung over one shoulder, very dirty, but as full of bravado as the lot of them. Along with a gust of dust the air was now laden with the strong stink of horse and cow. A few of those swaggering steps inside the parlor, however, and I knew that I wanted that dark gaze to seek out mine. But like so many, it turned instead to the yellow curls and voluptuous promise that Angel offered as she leaned over the piano.

Otis didn’t know Chopin from Mozart, but I could hum a little of something and he’d pick it up right away and make it a tune of his own. I sometimes wished I remembered more from the family years to add to his repertoire. Mostly he played campfire tunes and church music everyone knew, at a joyful pace that added to the sparkle of the lamplight. Just then the tune was sweet, as sweet as Angel’s expression.

The new cowboy came to a stop mid-room. A glance at Cherry, who nodded permission, brought an easy nod in return. Otis stopped playing as the cowboy took two steps nearer to Angel.

With a charming half-bow, the cowboy gestured at Otis, but never stopped looking at Angel, who was smiling back an anticipatory yes. The girl hadn’t a brain in her head, and likely didn’t know what I—and Cherry no doubt—had figured out at the cowboy’s first step.

“Please,” the cowboy said to Otis, in a voice thickened by trail dust. “‘If music be the food of love…’”

My needlework tight in my hands, I said, “‘If music be the food of love, play on.’”

The cowboy swung round to face me.

Dark eyes studied me and I returned the favor with my own intensity as I added, “Duke Orsino, Twelfth Night, act one, scene one, line one.”

“This girl,” the cowboy said to Cherry, pointing at me. “For the night.”

I took her upstairs.