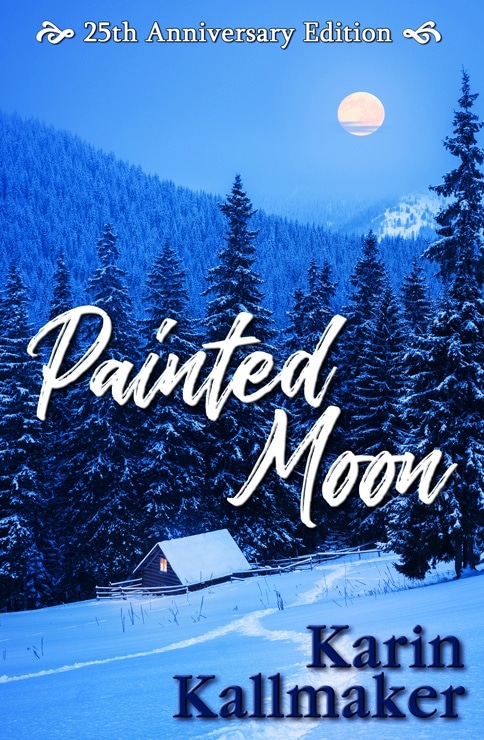 Cursing the familial obligation that sent her into the path of a blizzard, Jackie Frakes is deeply grateful for rescue on a snow-choked mountain road, even if her rescuer’s reception is as cold as the Sierra Nevada high country.

Leah Beck spends her days in a twilight of grief, actively avoiding all reminders of her former life as an artist whose work was exhibited nationwide. A houseguest for Thanksgiving is disruptive and painful, and the very last thing she wanted.

The snowbound weekend leaves them with an unforgettable, undeniable attraction that challenges both of their personal and professional commitments. Leah turns to her art with renewed inspiration while Jackie seizes control of her future. But will these new paths lead back to each other? Or will that stunning weekend together be their last?

One of Karin Kallmaker’s most enduring, popular novels, Painted Moon 25th Anniversary Edition features a new foreword by the author, and additional next chapters for Jackie and Leah, including a previously unpublished story.

It was daunting to update my now classic story. I was reminded of the realities that lack of civil rights created, realities that didn’t have to be explained 25 years ago. Realities that a younger reader couldn’t fathom as normal. I talk more about this in the introduction to this new edition.

I’m really pleased to have the short story “Smudges” (previously only available in the Frosting on the Cake collection) and a brand new short story “Living Canvas” included to update everyone on where Jackie and Leah are now.

Paper and digital formats of the 25th Anniversary Edition.

for "Kallmaker" - there's only one! Here's a quick link to 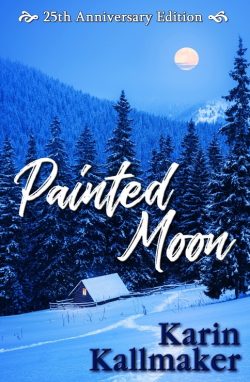 Excerpt from this New Edition

Leah Beck found the idea of giving thanks ironic. She had little to be thankful for. She switched the radio off and welcomed the return to silence, but the quiet was short-lived. Another gust of wind shook the panes in the A-frame of the loft above them and Butch leaned her whole weight across the back of Leah’s legs with a whimper.

“I know, girl,” she said absently. She thumped Butch’s side through the thick white fur. Somehow Butch always knew when provisions were running low. If she didn’t get into town and back before the storm, they’d be eating canned baked beans for Thanksgiving and several days after that.

Leah looked forward to being snowed in. If Mother Nature kept her from the outside world for a few days, then for those days the isolation wasn’t by her choice.

This was her second Thanksgiving without Sharla. She wondered when she’d stop counting. “C’mon, girl,” she said. She pulled on her plaid parka and well-worn snow boots. The earlier she started out the more likely she wouldn’t need chains to get back.

Butch didn’t need any encouragement. She scrambled out the door ahead of Leah and when the truck door was open, she hauled all ninety-five pounds of her Alaskan Husky body into the passenger seat. When Leah slammed the door after her, Butch barked once.

The drive into Bridgeport wasn’t bad—the old Chevy C/K was more than heavy enough to stand a little wind. But when she came out of the market, the snow was coming down in small flurries. She quickly stashed the paper sacks onto the floorboard below Butch. Butch panted and licked her lips.

“If you so much as nibble at that turkey, you won’t see a single drumstick.” Leah didn’t know why she’d gotten a turkey except that they were really cheap—the penny-wise aspect of her Brethren upbringing stayed with her no matter what her current bank balance was. In the back of her mind she thought perhaps she’d set the table with an empty chair for Sharla. Maybe Sharla’s spirit would visit. Maybe it would leave her feeling whole instead of walking around like a ghost. As though she’d been the one who had drowned.

She made a quick stop at the post office. There were two letters and a parcel she had to collect at the window. One letter was from her mother. Leah wasn’t sure she should read it. The other was from Maureen and Valentina, persistent friends who continued to write even when Leah didn’t answer.

The return address on the parcel made Leah catch her breath. She scrubbed her parka sleeve over her eyes. Why hadn’t she cancelled her standing instructions with the art supply house? Every time one of these boxes arrived, it was like a knife in the chest.

The flurries had thickened. She had to bend into the wind to keep the snow out of her face as she went back to the truck. Why was everything so hard? Leah slammed both fists on the steering wheel. The spark of fury dwindled as fast as it had flamed and she closed her eyes against unaccountable weariness.

Butch whined and gnawed on the sleeve of her parka. Leah shook her loose and tried to calm herself. The snow was coming down in a no-nonsense steady flow. She didn’t have time for the luxury of grief.

Jackie Frakes leaned forward to peer anxiously through the windshield. She flipped the beams to high, but the wall of rain and sleet reflected the extra light into her already straining eyes. She still could see nothing farther ahead than another car length—maybe two. Wincing, she switched back to low beams and prayed the lines on the road would remain visible as rain continued to wash over the pavement.

The turnoff for Bridgeport loomed out of the dark and she slowly bore to the right. She clutched the MG down into low gear as the road curved and then headed what felt like straight up where the rain would be snow. Next stop, six thousand feet and then some. She flicked the radio off now that that five o’clock news had ended. It was hard enough to focus on politics when the skies were sunny, and the reception was filling with static.

There was nothing else to do but inch ahead and curse everyone responsible for her predicament. This surely couldn’t be her fault, she thought. Oh no, you’re not the one driving an old sports car in this weather.

No, it was her mother’s fault for guilt-tripping her into spending Thanksgiving with her nearest living relative—an aunt Jackie she hadn’t seen since she was a toddler.

It was also Parker’s fault for advising her to buy the used but sporty MG when she had really wanted something with 4-wheel drive.

It was without question mostly her boss’s fault for one delaying request after another. She’d only come in that morning because Mannings had said the last-minute changes to project specs were minor, but he wanted to forward them to the client before leaving for the long weekend. It never failed—her requests for days off were “inconvenient” and whittled down, and even when he did agree he came up with emergencies. A deadline always came along and she felt guilty, harried and ill-used by the time she left. Mannings would refer to her untimely departure for weeks. If you’d stayed another hour, you would know why the project changed…

He would have kept her there until midnight if she hadn’t given him The Look. The Look told Mannings she’d had enough of changing CAD specifications one at a time and, no, she would not do a new set of twelve color proofs before she left. The Look said she was sick of ticky-tacky box condominium design, Mannings, and the last-minute rush jobs that were keeping her later and later in increasingly foul weather.

All she had said was that she would do it on Monday. He became all consideration suddenly, expressing concern about the long drive ahead of her and the weather. It would take a lot out of a gal, he had said, to undertake a six-hour drive up into some pretty big mountains. Jackie gritted her teeth. He always paused before saying gal—she knew he still wanted to say girl. She gave him The Look again and told him no, she did not think starting out tomorrow morning was better. Her aunt served Thanksgiving at one p.m., and she wasn’t getting up at five o’clock in the morning to get there in time.

She clenched the wheel and cursed herself for being too much of a coward to tell him that if she’d had the whole day off as she’d intended, there wouldn’t be a problem. Instead of a relaxed, scenic daylight drive, she’d sped past snow-dusted Topaz Lake as the last of the winter sun faltered.

The wan headlights flickered over an elevation sign: 4,500 feet. And she was still heading up. She was certain she was lost. She reached to turn the heater up again but checked herself. It was up as far up as it would go. Half-frozen rain clung to her wipers. Another blast of freezing air worked its way around the ragtop and Jackie groped in her glove compartment for the thin driving gloves Parker had given her. They weren’t lined, but they were better than nothing.

She braked at the top of the pass and was relieved to see lights of civilization below her through the smearing slush on her windshield. A few miles later a sign reassured her that she’d found Bridgeport at last. It was a small place and she was through it in a few minutes. There were only a few other vehicles in sight and all the houses she passed looked hunkered down for the storm. She drove carefully along the highway and fought back a tremor of fear. The left-turn pocket her aunt had told her to take popped out of the glare after only a few minutes of tense driving and Jackie heaved a sigh of relief. It was only another ten minutes, her aunt had said. She decided that she could make it to her aunt’s house.

Of course, her aunt hadn’t known it would be snowing. There were no street lights. City girl, she chided herself, you’ve gotten soft. Her MG wasn’t made for this weather, she knew, but she had no choice except to press ahead. The snow thinned as she slowly ground her way up another grade. As the odometer clicked forward each tenth of a mile, she guessed that her aunt’s ten-minute estimate might be a half-hour at this pace.

Her fear and doubts returned in full force when she crested the first grade. She hadn’t realized it had been sheltering her from the wind and the worst of the snow. The MG shuddered when the initial blast of Arctic air hit it and snow immediately glazed her windshield. She sacrificed the warmth of her feet and turned all the heat onto the windshield. It helped, a little. She slowed to a crawl and guided the car from mile marker to marker, grateful she could tell where the side of the road was.

The landscape appeared to stand still while the minutes clicked by. Jackie was beginning to feel as though she would end up in Brigadoon.