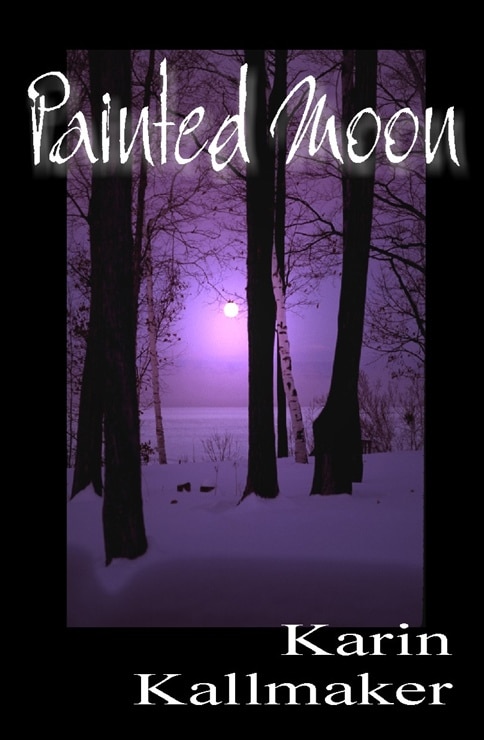 Meet Jackie Frakes, a talented architectural intern. Her life has fallen into unsatisfying patterns, both personally and professionally.

Renowned artist Leah Beck is exhibited in galleries nationwide. But her life has darkened with the death of her lover, Sharla.

Trapped by a mountain snowstorm over Thanksgiving weekend, Jackie is rescued by Leah. The snowbound weekend in Leah’s cabin shakes the very foundations of Jackie’s life. As for Leah, Jackie provides renewal and inspiration for her work. But … exhibition of Painted Moon, her new series, will reveal Leah as never before, as a lesbian artist.

Their relationship increasingly torn by conflict and misunderstanding, the winter weekend together will surely be their last. Then intervention comes … from a most unlikely source.

One of Karin Kallmaker’s most popular novels, Painted Moon has achieved the status of a timeless classic.

The original Naiad cover with the abstract figures… Look closely, yes, that’s a dog. Really. It’s a dog. A dog playing in the snow. Honest.


Fans of this book won’t want to miss the follow-up short story “Smudges” in Frosting on the Cake 1: The Original. “Smudges” is also included in the 25th Anniversary Edition.

Visit Karin's store to order a copy of this out-of-print edition.

Paper and digital formats of the 25th Anniversary Edition. 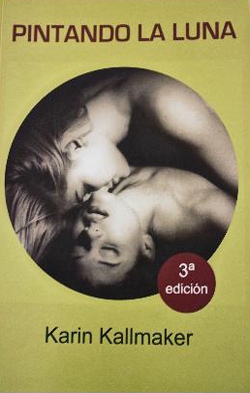 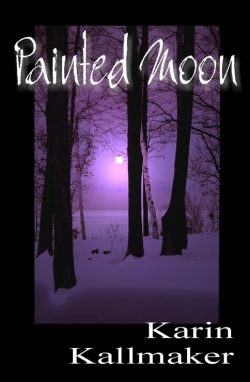 Excerpt from this Original Edition

From Chapter Five of the Original Edition

Leah was having a beautiful dream and she hoped it wouldn’t end soon. Under her hand was soft stomach. She moved slowly, trying to keep the spell. Fine ribs under her fingertips.

It had been so long since her fingertips had felt this alive.

She ran her fingers over the velvet skin and in her dream heard a soft sigh and the rustle of bedclothes. The body was closer to her now. She could stroke the smooth back.

It wasn’t Sharla’s back. That’s what she would have expected in a dream, but this back felt different. I still love you, my darling. But she would give herself this dream because it felt good.

Her own body felt ripe and heavy as she caressed the dream woman. She felt a little dizzy because her fingertips were sending her such vivid, tactile sensations. She moved closer very slowly, afraid of waking herself. Finally from out of a tousle of hair – too much hair to be Sharla – she could see a sensuous column of throat. She moved the silky brown strands aside and pressed her lips to the pulse.

The fire in her limbs leapt to full height. She kissed the throat, then the shoulders, again and again and knew she would wake herself, but she couldn’t stop as her need burned stronger with each kiss.

Then the dream woman sighed – a soft oh and a deep breath. She moved into Leah’s arms and Leah couldn’t restrain herself. Her hands caressed the melting breasts, then she took one in her mouth. The dream woman quivered in her arms and her back arched, offering.

Leah jerked herself away just as Jackie went rigid and gasped, “No.”

“I’m sorry,” Leah gasped back. In the dim light she could see Jackie frantically pulling her T-shirt down, yanking the covers up over her shoulders, putting barriers up between them. Leah said more calmly, “I didn’t know what I was doing. I thought you were a dream.”

Jackie said, “It’s okay. I understand. I should have stayed downstairs, but the fire went out. I’m sorry. I didn’t mean –”

“It’s okay. I started it. I thought you were Sharla. I was dreaming.” That was a lie, Leah knew.

And you were enjoying it, Leah thought. Until you were fully aware it was me, you were responding. Oh lay off it. She told herself crossly that even if deep down they were all sexual animals it didn’t mean that Jackie was on the verge of becoming a lesbian. She was probably dreaming about her boyfriend and one pair of hands is much like another. Sooner or later she would miss that all-important thing men’ve got.

“I promise to stay on my side,” she said aloud. “I didn’t know you were there. There won’t be any repeats.”

“I trust you,” Jackie said quietly in the dark. “It’s okay. Let’s go back to sleep.”

Leah curled into a motionless ball. She felt miserable and told herself it was because she had betrayed her memory of Sharla. She told herself that she could sleep, despite the needles of sensation that reminded her that she was a living woman with a real, live libido and that Sharla – her loving, compassionate Sharla – would have understood.

Jackie emerged from the shower wrapped tightly in Sharla’s chenille robe. Her hair hung in a curtain down her back and Leah’s fingers twitched as she recalled too vividly what it had felt like last night. She was aware that Jackie wouldn’t meet her gaze. She herself was too aware of how she had wanted that body – not Sharla’s, not any woman’s, but Jackie’s body – near her. No matter how often she reminded herself that Jackie had a boyfriend waiting for her, the prickling in her fingers wouldn’t go away.

“I’ll make eggs,” was all she said. “As a break from turkey leftovers.”

Leah gathered the ingredients from the fridge, staring intently at the egg carton to avoid any eye contact with Jackie.

As she set them down, Jackie said hesitantly, “Before you start that, I just need to clear the air about last night.”

“It’s okay,” Leah said. “I really don’t know why I stepped over the line like that.”

“I don’t know why I did either,” Jackie said.

Her voice was low and Leah heard her swallow. She turned to look at her, to watch that face flicker with emotions. She would paint it gray uncertainty, purple determination, chartreuse fear.

“I have to be honest with you,” Jackie continued. “I – I’ve never wanted a woman before. But I knew … last night. That you were a woman. I know I said stop, but that was the surprise of it. I didn’t want you to stop. And now –” She put one hand to her throat and swallowed again. “I’m not sure what to do about it.”

Leah shook her head, deeply sorry about the mess she’d gotten them into. No matter what her own body wanted, she had to be firm. “I don’t … I don’t help straight women assuage their curiosity. You’ll have to find someone else.” Leah found herself swallowing hard, too. She felt short of breath.

“That’s not – I’m sorry, I didn’t realize what I was asking. What … oh shit.” Jackie’s face was flushing crimson. The patch of skin visible at the top of the robe was tinted orchid pink. “Forget I brought it up. I’ve made everything awkward.”

“I don’t know!” Jackie looked down at her feet. “The way my body feels doesn’t make any sense. It feels strange, different. But you’re right, I can’t just ask you to work this out for me. I have to do it myself.”

Leah realized she was breathing hard. She had also unconsciously moved closer. “Jackie, it’s not that I don’t …” Want you. She did. Jackie had marched in here and dispelled Sharla’s ghost. She wanted to hold onto this warm, breathing, lovely body as long as she could.

Jackie’s gaze was unfocused, her mouth slightly parted. Leah couldn’t stop herself from staring at Jackie’s lips. She’d stared at them too long last night. She had wanted to touch them too much last night. They were even fuller than before, glistening. She devoured the rest of the face that she had already spent hours sketching. Skin flushed, slightly damp.

She pulled slowly and gently on the lapel of Sharla’s robe. The knot around Jackie’s waist loosened. Sharla’s robe, but Jackie’s body within.