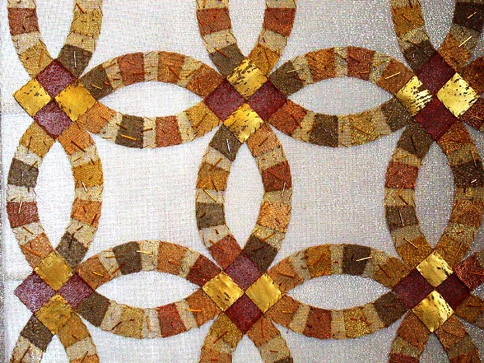 Continuing the story of our wedding on Monday, I’ve had a number of questions about the process itself. There were many wonderful elements of the day that underscored that as far as the state of California is concerned, gay couples are just like everyone else now.

Backing up a little bit, my folks arrived around noon and of course we were all half ready. I was ready from the waist up, my hair improbably welded in place. My partner, not one to primp usually, was primping. Our daughter was showing her bling to the neighbors and our son was skateboarding (of course in the clothes he was wearing to the ceremony). My mother brought a beautiful bouquet and my dad promptly investigated the 5000-piece puzzle on the dining room table while the womenfolk nattered. My brother-in-law called from the airport for directions to the county recorder’s office, we synchronized our watches, piled in the van and headed off at two o’clock to get married.

Since I’m called for jury duty every 18 months, I knew the way. It was a lovely day and Lake Merritt was sparkling in the sun. We found parking and into the chaos we went. Well, at first it seemed chaotic but since she is a Six Sigma black belt and I’ve done oodles of work organizing processes (which doesn’t work as well with children as it did with accountants) we saw how the process worked.

We asked at the desk where it said “Start Here,” were quickly shown to a computer, we typed in our stats, hit send, returned to the desk and were given the all-important receipt: W350. Noted was that we also wanted a ceremony after we got the license.

We retired to some seating to wait. W346 was the last “W” that had been called. At this point my mom said it was like waiting for the order at In and Out. I answered that nobody had asked if we wanted fries with our license. We watched the process move along. R231, M417, W347…and so forth, all broadcast by a pleasant female voice and displayed on a prominent screen that updated every five seconds or so. We always knew where we were in the queue. Finally, W350 was directed to counter five and the entourage moved to the inner area.

The clerk greeted us, congratulated us on our plans to marry, and took our information.

We showed driver’s licenses, wrote the check, and I chose that moment to ask my partner if the check would bounce but she was distracted by her brother and the clerk just looked at me, then burst out giggling. Not too much longer we had our license.

We went back to the main lobby to wait to be called for the ceremony. At this point, anyone with a license can go anywhere they like, in the state, to have the ceremony. If it isn’t used, the license expires in 90 days. Anyone duly authorized can do the ceremony and sign it. You can even have a friend deputized for a single time, but it’s a bit of a hassle for the friend to go through the process. We were opting for the commissioner to do it because it was easy and indisputably official.

As we waited, W354, R237 and so forth were all processed through. After a while a pleasant woman with a southern accent arrived to take us upstairs. In we went to the ceremony room. It was a brightly lit space, and prettier than I expected. The pattern in the background is a traditional ring quilt. She told us where to stand and then gave us a choice: the sweet, fluffy ceremony or the other one, for couples who have been together a long time. My impression was that the choice had been around a while. We chose the one for long-term couples. No vows of our own, no ring bearers, very simple. Very legal. Ten minutes later we were married. All-in-all, we spent more time taking photos than I think we did getting married.

I had flashes of “Father of the Bride” (Spencer Tracy and Steve Martin versions). At times I was recalling all the weddings I’d been to, and I liked ours a lot. After 31 years, spending the equivalent of royalties from a book or two on a wedding wasn’t where either of us was at. We’d rather travel. Or send the kids to college.

After that, the commissioner realized there was a mistake on the license and she hurriedly got it all redone. She signed, we signed, witnesses signed, and we took it to the official recorder who said “you’re all done” and gave us the copies of the certificate of marriage, stamped with the state seal.

My mom admitted she had been a nervous wreck thinking something would happen to prevent it, but no, we were Official.

So that I don’t digress into the fact that neither of the heterosexual couples who were W349 and W351 left the building not sure if they would still be married on November 9, I’ll add one last thing about our visit to Officialdom. As we left, I noticed two women sitting side-by-side, studying a document between them. They weren’t dressed for a ceremony, but the way they were sitting, the fact that Oakland is 30% lesbians and the Birkenstocks all added up to “sisters.” They noticed us and nudged each other and had huge smiles. As I passed them I said “It’s finally legal” and they both beamed and said “Congratulations.” I left the building with a big grin on my face.

We’ve gotten married before. At sea on a cruise, at a sort of surprise wedding before our first child was born, and in front of the IRS during the March on Washington in 1993 (officiated by Troy Perry). Every single one of those weddings took longer than the real thing (Reverend Perry is prone to speeches).

I don’t know why, but it pleases me that the real thing, when it finally happened, was efficient and streamlined and we were, in every aspect, treated just like everyone else.

That’s the point of civil rights, to me.