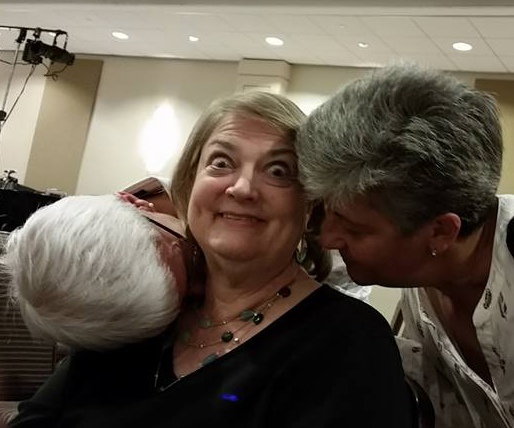 There’s a reason to read to the end. Just sayin’.

Head Colds are lying sacks of you-know-what. You get the ‘flu and you know you’re down for a long count. The ‘flu gives others visible physical evidence that you are Not Well. Head Colds, however, build slowly and all the while they whisper in your ear that it’s not so bad. You’re okay. You can go about life – it’s just a sniffle or two.

Head Colds exploit the fact that nobody wants to hear about your mucus. Freebie tip: I suggest that you not use “mucus” or even “mucous” in love scenes, fictional or real.

As you fall under the Head Cold’s spell you ignore the dizziness, lack of oxygen and long spells of mental incapacity. Finally, you might take some meds because maybe, after all, you really are sick. To the rest of the world you sound a little bit off and nasal, that is, until they realize that you are drifting in a world of mucus-induced hearing loss. That you are taking mental naps throughout conversations. When you suddenly ask, “When did we get to Chicago?” they realize, hmm, maybe she’s Not Well.

First, the Sarcastic Thank You

Thank you, couple on flight from Seattle to home two Sundays ago. You held back all signs of having massive head colds until it was way too late for me to pick another seat. Wednesday, 3 p.m., I came down with your cold. By Friday at the Golden Crown Literary Convention I was down for the count, started taking the heavy duty meds I said I didn’t need which actually did help (which means a certain friend will be so I-told-you-so), and had lovely, salty, hot chicken soup another friend produced from her emergency travel preparedness kit. 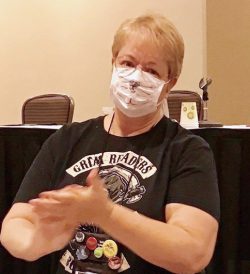 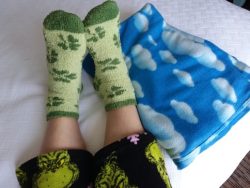 All of Friday. Feet up, dozing, catching Pokemon.

I surfaced in the evening so I could at least sign books for readers. I was a walking blast radius of cold germs, but I put my faith in a surgical mask and lots of Purell.

While I was really bummed to miss an entire day of the 2017 iteration of the Conference-I-Will-Not-Miss, here’s what I took away: It’s About Love. 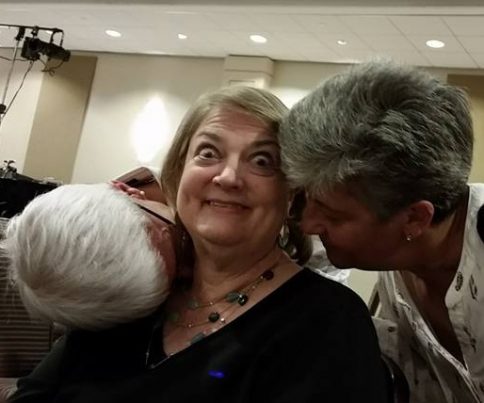 It looks that way on the surface, I know that. Hugs everywhere. (Sorry anyone I infected on Wednesday before I began germ radius reduction protocols.) More hugs, and I mean the full-on top quality lesbian body hugs. Everywhere there are women embracing, plenty of smooching and hijinks (e.g. friends Dar and Peggy, expecting snozberries, got in on the Erica Abbott tasting. Kudos to the photographer and the friends who came up with great captions.) Smiles on nearly every face. It’s splendorifous.

But I’m not talking about that.

I’m talking about a team of women sorting out the registration process. Making speaker placards. Filling bags with goodies. Video taping sessions. Waving cards to warn people their speaking time is up. Loaning cars for grocery runs. Making airport trips. Finding someone to turn up/down the heat. Asking if they can help you. Taking a turn at something so someone else can get food. Checking if the water in the meeting rooms needs to be refilled. Herding squirrels, err, I mean participants, to do what they need to do.

Everywhere I looked there were women in the middle of acts of love, big and small. Everywhere. Right in front of my eyes. Love for books, writers, readers, each other, love for themselves.

When I was unable to take part in an auction, wonderful Bella Books colleagues did it for me, and raised some mucho bucks from a reader who loves books and the community and who she is, making it possible for more women to attend next year. I was able to join the resulting dance 36 hours later. It was epical, loving, so, so fun.

So if you volunteered for GCLS2017, thank you for the love you put out into the world. Thank you for non-stop five days of love. It was what we all needed and what I needed.

And that’s just the love that I could watch unfolding! Before the conference countless hours of volunteer effort resulted in a terrific schedule, printed programs and materials that looked fantastic, after-hours events that allowed for a lot of laughter*, awards event that was smooth, lively and had not a single LaLa Land moment except for the one that was on purpose. Contracts were negotiated, bills were paid, money was raised.

That kind of volunteer time poured into an event is de facto a labor of love, and we’re talking really big love here. Some of them went home and immediately asked for proposals for next year’s conference. Love or lunacy…could be a fine line on that one.

The times we’re in are sucky. Demoralizing and dangerous. These women aren’t lighting a mere candle of love in the darkness, they’re hooking up airport runway lights to solar-powered generators and cranking them up to effing ELEVEN.

The landscape is flooded with the undeniable, warming bright light o’ lesbian love. Which is resistance.

Thank you. All of you. Maybe I needed to be whacked on cold meds and wondering what city I was in to really see what was going on. Sunday morning, feeling much better, everywhere I looked there was this effing amazeballs brilliant display of love.

I Promised a Payoff

Go here. Put in cart. Go to checkout. Ignore the stated coupon code. Use coupon code karink instead. Checkout. I’m only keeping the code active for a few more days.

See, I meant to tell anyone who asked me to sign a book about the code. And I totally, completely, utterly forgot. That’s one thing. The other is that I was a no-show for an auction, a panel, and a reading. I’m sure many, many people were disappointed. Hoards even. Indulge me here.

Plus I’m feeling a lot of love right now, thanks to all of you. My stories are about love and that’s what I put into the world. So if you don’t already have it, add some love to your reading stack.