It was a Busy Weekend

My gay agenda for the weekend was full: an audiobook drawing, holiday shopping, candy-making (cut my thumb, ouch!) and dueling Community Days for my Pokemon Go and Wizards Unite fixations. Still no shiny Ralts. Drats.

Oh, and Hallmark banned an ad with two women kissing at their wedding, then unbanned it and issued an apology. Maybe you heard?

I’m mostly going to repeat what I posted on Facebook over the course of the weekend because not only did I vent my shock at Hallmark’s gutless caving to a fringe group of homophobes, I learned something that I should have already known: Hallmark’s holiday programming is nearly 100% white. In 2019.

I’ve read the apology and it says all the right things. They’ve got hiring practices and LGBTQ cards, and are partnering with a prominent LGBTQ organization to broaden their perspective. That’s all good. But my concern about their other commitments to diversity, namely racial diversity, remains. Such a stunning lack (see below) – is inexcusable at this point.

So no, they can’t buy my LGBTQ eyeballs with only LGBTQ representation. I want comprehensive representation or my eyeballs will go elsewhere, permanently. There are plenty of other places to aim them while I wait and see.

In case you missed it on Facebook, here’s the whole rundown of events from my perspective.

The “Controversial” Ad from Zola Airs

It’s super cute! If I were planning a wedding I’d totally look at Zola. By the way, that “controversial” kiss lasts less than a second.

The Homophobe Troll Express Fires Up

A Facebook friend posted about how pleased she was to see two women kissing in an ad during a Hallmark Christmas movie. Combined with the CEO’s recent interview talking about the possibility of LGBTQ inclusion, this was a sign of good things at the Hallmark Channel.

Within a short time, friends and not friends had landed on her post to say remarkably same-sounding phrases along the lines of “Hallmark was the only place left that was safe from the liberal agenda.” They were signing a petition about the awfulness of the gays being in their line of sight.

I heard the homophobia (and saw the coordination of the language), but expected their petition to come to nothing. It was a shock when Hallmark not only caved, they caved fast and hard, and with utterly nonsensical reasoning about “controversy.” Here’s the New York Times story about how Hallmark spokespeople couldn’t find a rational justification for why the lesbian kiss was controversial.

Hate is the controversy, not love. If you can’t choose sides between love and hate, you’ve chosen a side.

Yes, as I said above, they’ve reversed themselves. But at the time, they made damaging, painful arguments. Queer people know that dance when we see it, i.e. it’s our fault that other people hate us.

Here’s what I posted with the link to the above NYT article:
They’re not taking sides, you understand, they’re just saying that homophobes who generate controversy are to be indulged, and our love should be invisible.

#Hallmark won’t be getting my eyeballs on any programming anytime soon, not even if they FINALLY deliver on their long, long teased “openness” to romance movies with LGBTQ couples. I mean, if two women kissing is “controversial” and now removed from their network, what exactly will happen in any romance featuring a LGBTQ couple? Lovingly pressing their foreheads together but never their lips?

Some Twitter dude of course had to immediately tell me that he didn’t care if I was gay or about my gay stuff, but he was tired of it being “rammed down his throat.” Diagnostic choice of words, as always.

I promptly resurrected my #PleaseBoycottMe meme for the so-called One Million Moms. My post with the meme:

The last time I did one of these was in 2013. After a series of completely unsuccessful boycotts (pass me some of those rainbow Oreos), One Million Moms was laughably irrelevant. Unfortunately, #Hallmark has given them life again.

So, once again, I beg the so-called Moms to please boycott me. Hallmark doesn’t want the controversy, but I’ll accept it.

Maybe Hallmark will reverse course. I’m snarking on them in the meantime, but it gives me no pleasure to do so. 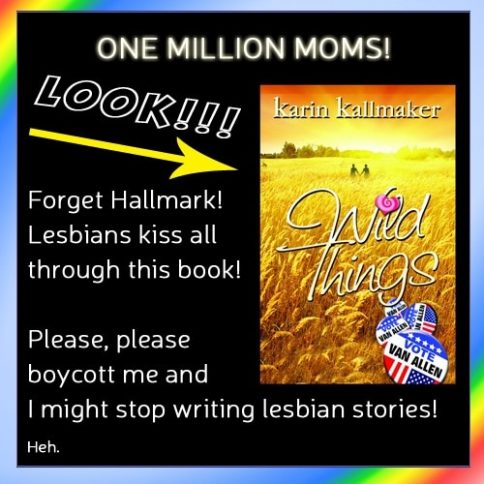 Chely Wright and Ellen Degeneres were among those who asked the Hallmark Channel, “What were you thinking?” Netflix promptly waved their rainbow credentials and invited us all there. I would not be surprised to learn that ad agencies representing the really big accounts signalled that it wouldn’t take much for those clients to pull their ads too. It’s one thing to piss off tiny Zola. Another to piss off Subaru. For example.

Because Hallmark’s Crown Media bungled this situation so badly, a whole lot of the weekend interwebz overflowed with details on where to find alternatives. For example, like Lifetime, where upbeat, happy celebration of the season isn’t just for white people. Suggestions and recommendations abounded for ways to cut Hallmark out of your life and not miss them. At all. Maybe not ever. #MarketingFail doesn’t even begin to cover it.

I really did hope they would change their minds.

And Then I Saw the Reality of #HallmarkSoWhite

I scrolled through the last month of Hallmark Channel’s Instagram feed. They post frequently and the images there represent their brand, especially their Christmas season of offerings now in full swing. What did I find? Since late November, anywhere from 100 to 150 white faces smile out from their feed, in singles, couples, and family groupings. I could count the darker faces on one hand, all singles. 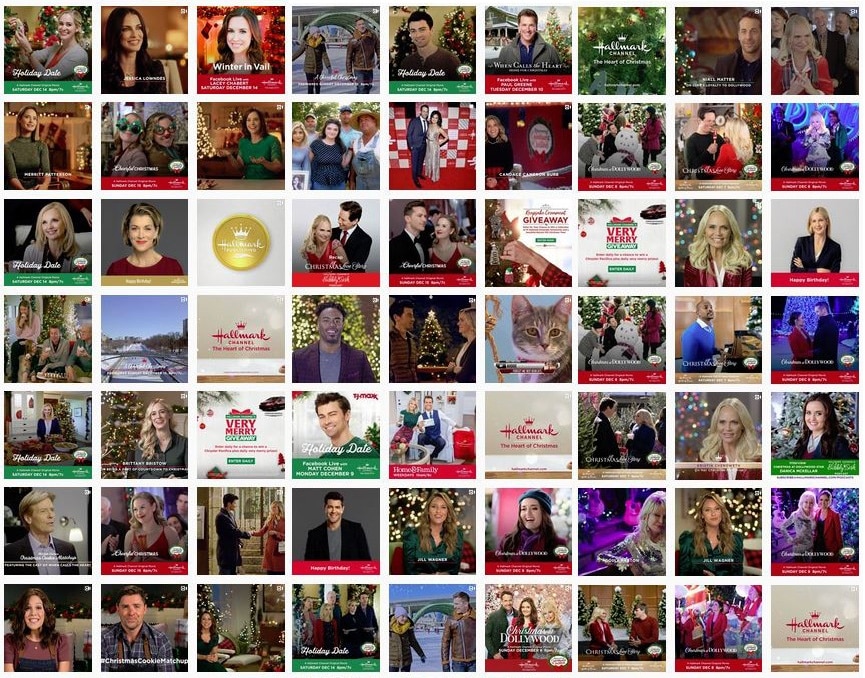 I know this image is small, but see for yourself. If there are more than the maybe two projects with people of color represented in the last month, Hallmark Channel isn’t letting those faces represent their brand.

For comparison, here’s Lifetime’s Instagram feed for just the past week.

How did I not know until that moment that Hallmark Channel’s upbeat Christmas lovefest is not just kind of white, but really very quite sincerely white? Same-sex marriage has only been available in all 50 states for a few years and as tiring as it is, some people are still getting used to it.

Is Hallmark still getting used to people of color as flirty, heroic, sexy, funny, and inspiring?

Any ally for inclusion should take a long hard look at Hallmark Channel’s entire representation. Is a movie or two with LGBTQ leads enough to overlook the oh-so-white Christmas?

So Shame On Me

My final FB missive on the matter, posted before they apologized and announced the reversal.

I’m not an avid #Hallmark watcher. In fact, I couldn’t have told you the difference between #Lifetime and Hallmark – at least not until yesterday. I watch rom-com offerings when someone tells me about a good one.

Get out your sunglasses because the glare of white faces is blinding.

Out of their last 100-110 posts (back to about Nov 29 or so), there are 3 different people of color featured 4-5 times in total. None of them are shown snuggling with anyone. The other 100-105 posts features all white faces, and about half those white people are allowed to get close.

Lifetime on the other hand, has posted pics of 4 different people of color in the last day alone, and their people of color are allowed to snuggle up close to another person and sometimes shockers it’s even a person of another ethnicity or race.

I may have miscounted, but even if I missed a couple of people of color nothing changes the reality of the overwhelming #HallmarkSoWhite. If you want to argue methodology, you’re missing the obvious takeaway.

I’m ashamed to admit that I had no idea that Hallmark’s entire programming of holiday movies is nearly 100% white. Is it 2020? What’s the excuse for all-white programming? Avoiding controversy? Meanwhile giving lip service to “inclusion”?

This is not okay.

So no, they can’t get my eyeballs back by LGBTQ inclusion alone. I will watch again when their offerings look like the real world. My distaste for their clear and persistent intent to feature only white performers and presenting Christmas as White Peeples’ Holiday will extend to their stores and other products as well.

When I saw the early outrage “oh no the gays!” posts with repetitive language of “Hallmark was the only place left that was safe from the liberal agenda” I heard the homophobia.

But I also should have heard the racism. 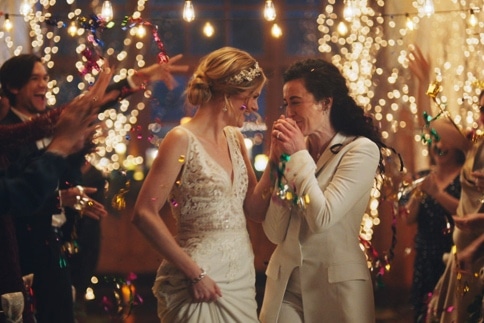 As Widely Posted, Alternatives to Hallmark for this Season of Love

The Mary Sue wrote up a good list of alternatives to Hallmark for specifically queer holiday content. Go check it out!

Here Are Some Great Queer Holiday Movies and Shows to Watch Instead of Hallmark.

Of course there’s Netflix offerings and The Lifetime Channel where the holiday spirit is for everyone – though there is still plenty of work to do.

Indie producers Tello Films has also given us the perfectly named Season of Love. Here’s the trailer, and enjoy!