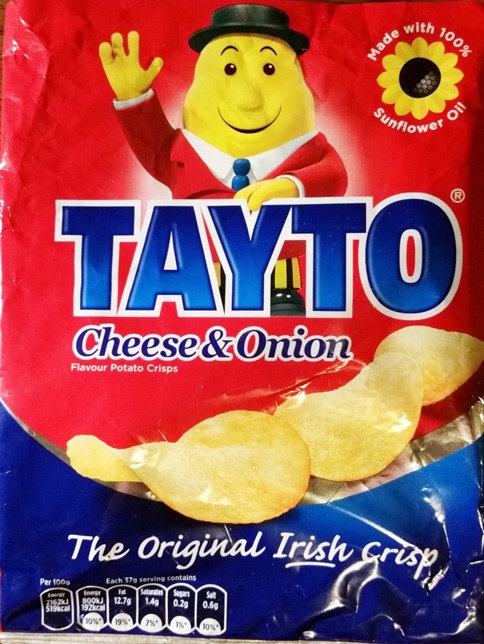 Ithad to be done. I donned the mantle of science and tasted the most common crisps on the Emerald Isle. A great personal sacrifice, I know. This is my evaluation, which nobody asked for. Plus, I’m quite sure that no one in Ireland cares a rusty nail about what a Yank thinks on the subject.

But I have a pile of receipts from SuperValu and Tesco and have to write them off somehow! Onward! 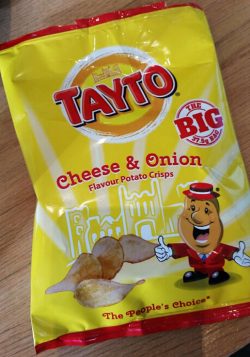 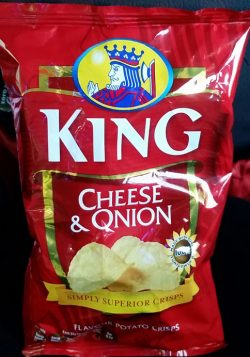 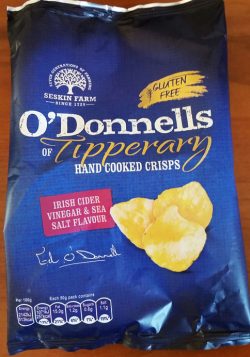 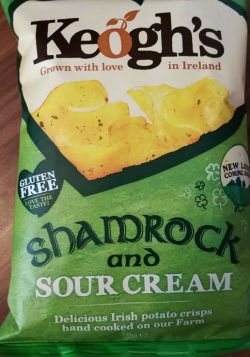 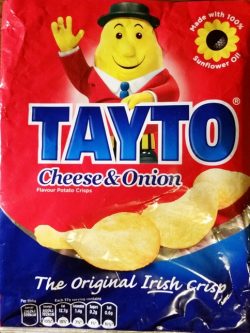 The Ubiquitous Cheese and Onion

No matter where we went, onion/cheese flavor was always in the prime position to be purchased, and there were twice as many as all other available flavors put together. It appeared to be the favored flavor combo across all counties we visited, which was any county that touched a shoreline.

As a reference point for my experience of the brilliance that is Ireland’s crisps, in the USA we have three basic flavors. They are available more or less in the same quantities in a typical market: sour cream and chive, barbecue, and good ol’ plain and salty.

Plain was almost impossible to find in Ireland, and if there was a second flavor available, it was usually salt with vinegar or a variation on onion and cheese. Sometimes there were a few bags of prawn cocktail flavor which I assumed to be a horseradished version of our barbecuey tomato, but I never did try it. I was hoping to find Tayto Snacktime Bacon Rashers, but alas, it didn’t happen.

For the purposes of science (yeah, this was about science, sure) I wish I could have found plain of each brand in order to assess the texture and potato flavor. With flavored varieties of crisps or chips you don’t taste potato. Forget whatever flavor it is you’re tasting resembling the actual food as found in nature.

Given that the Irish make phenomenal cheese, I am quite certain they’re not confused about cheese versus “cheese” on their crisps. (If you want cheese, why are you eating crisps you daft American tourist?) The same is true in the USA: cheese don’t taste like that. I’m not sure sometimes Americans know the difference. However, call it “cheese” or “cheez” – it’s still tasty.

One note that might earn me back a few points of Irish esteem: I’ve ignored Walkers as they are a colonial brand.

I went for the classic yellow bag, cheese and onion, produced by Northern Ireland’s Tayto brand. Best part was the texture. I don’t think any American potato chip has the same thin, tender kind of texture while still being crunchy. Since the onion/cheese went so well I tried out the salt and vinegar (this was likely Ireland’s Tayto brand). Liked it even more. Unlike Keogh’s, I didn’t taste onion/cheese for the next three days after a single bag. (See addendum below 2017-07-30 regarding which is the “other” Tayto.)

Recipe tip direct from a Belfast cabbie*: Two slices of white bread, buttered, and a bag of Tayto cheese and onion. Open the bag and pour the crisps onto one of the slices of bread. Cover with the other slice. Crush and flatten, and enjoy with a cuppa tay.

I never did try that, but given the intensity of the flavor and the crispy goodness, I get it. After all, everybody knows a layer of barbecue chips on an ordinary deli sandwich means now you’ve got a tastebud party.

If I were going back to Ireland, a little imp of gluttony would be jumping up and down inside me shouting, “Oh goodie, more Taytos.”

We didn’t see O’Donnells as ubiquitously as Tayto or King brands, and when we did we went salt and vinegar. The texture was a thick, firm kettle crisp. I could break a Tayto crisp with my tongue. O’Donnells had to be chewed. There was a great vinegar tang to go with the salt. Just my sort of thing. Reminded me of several brands back home. Thoroughly enjoyable.

I know this is where I will get into trouble. I liked King brand’s cheese/onion flavor slightly better than Tayto’s. Neither was a bilious orange, which sets them apart from US chips claiming “cheese” is in the flavor profile.

But I found the texture to be more or less like Walker/Lays. Not that it isn’t a good texture, but it wasn’t anything unusual. If I wanted oniony cheese or cheesey onion and there weren’t any Tayto, I’d happily get King, though. I know that’s an awful admission to make, I mean, I might as well say I didn’t really care whether I got Lyons or Barry’s tea. How can I possibly claim to have any standards if I’ll shillyshally like that?

Tayto and King are brought to our palates by the same over company, Largo. So either way they win with my taste buds.

Here was something different! Not onion/cheese, but Shamrock and Sour Cream. I wondered if that would be like the sour cream and chive chips at home. However, they tasted much like an onion/cheese crisp did. But then on a crisp can anyone really tell the difference between purported “cheese” versus “sour cream”?

Yes, they were similar to a sour cream and chive flavor back home, and not an unpleasant blend. The chip was a similar texture to a Walker/Lays. Not kettle thick like O’Donnell’s or crispy tender like Taytos. Seriously, though, I have my doubts that shamrocks taste like this.

There was a downside to the sharp flavor. I brushed, flossed, rinsed, drank coffee, brushed AGAIN and I could still taste Shamrock and Sour Cream impregnated in my gums. It’s a flavor that keeps on giving.

I did find a bag of Keogh’s roast beef and stout in a shop, but it only came in a very large bag. Based on my experience with the shamrock/sour cream variety I had to pass on trying it. I didn’t want to get thrown out of our coach the next day.

So It’s Tatyo’s for Me

All in all, with much scientific analysis and great personal sacrifice, turns out I’m a Tayto Girl. If someone were traveling here from Ireland and brought me Taytos I would name a character in their honor.

Crisps in Ireland are brilliant overall. No sparing the flavor, never found a bag that wasn’t completely fresh, and none of these brands were the least bit greasy. Also, the ones I tried weren’t using lots of weird dye colors.

It was a lot of good snacking, and so essential. Because the rest of the day there was only the incredibly fresh eggs, gorgeous brown soda bread lavished with butter and strawberry jam, Guinness and beef pies, lemon tart with fresh cream…

Addendum: The “Other” Tayto

Though I was paying attention to the cultural difference between Northern Ireland and Ireland, it escaped my notice that there are two brands of Taytos, one in each country. Even if I had noticed I don’t think it would have crossed my mind that they were two different companies, and they don’t share a recipe. At the recent Golden Crown conference, the wonderful Millie brought me a bag of each, courtesy of Finn, the big Taytos fan in her family. A character in My Lady Lipstick will be named in Millie’s honor. Amazing coincidence – there already is a character named Finn!

I can’t be sure now, when I fell in love with Taytos, which color the bag was. I carefully enjoyed both of the samples Millie provided and noted the difference in texture – there definitely is one. But I’m at a loss to decide which one is the “other” Tayto and which one has my heart evermore.

I really do think, that in order to be fair and impartial, I will need to go back to Ireland and Northern Ireland and acquire more of both. You know, to be sure. Because science.

*Update: This is called a “crisp butty” because apparently you butter the bread. The cabbie didn’t mention this that I remember. I think this means I will have to go back to Ireland and find out. H/T Sue Robinson for the correct name. There is also a “chip” butty. For USA dwellers, this is a steak fry sandwich (white bread, buttered). And, though I hesitate to say this, a crisp butty is probably a healthier choice than a chip butty. In relative terms.